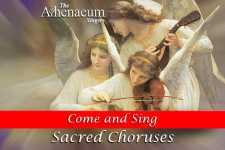 Everyone is welcome to join the singers in a day
learning and singing our best loved Sacred Choruses from the new OUP book of the same name, edited by John Rutter.

The English and French Connection

The Athenaeum Singers’ departing director, Cole Bendall, placed considerable demands on his choir for his final concert at The Minster. The programme consisted of two larger works and six smaller ones, all in contrasting styles. One sensed that he had indulged his own personal musical tastes and at times these were not necessarily on the same palette as that of his Singers. The music certainly stretched them to their limits and choristers are at their best when they are confident and relaxed. However the Singers responded creditably with some lovely moments to send him on his way.

James Macmillan’s O radiant dawn is harmonically quite accessible and, while the pitch wavered, it ended with well-voiced hushed Amens. The ensuing music by three contemporary female composers - Melissa Dunphy, Alice Tegner and Joanna Gill – were more demanding. There were times when it seemed as though the choir was feeling its way a little but they were at ease with the barbershop harmonies at the start of Alice Tegner’s music and there was some lusty singing in Joanna Gill’s I heard the bells on Christmas day. Will Todd’s My Lord has come was sung with sensitivity and a palpable sense of mystery at the incarnation.

Francis Poulenc’s Gloria is a unique piece in the choral repertoire. The melodic lines are often sketchy … wisps of angular music here and there, and not always predictable, posing real challenges to the performers. The organ playing of Will Briant was exemplary with well chosen, colourful registration and the perfect amount of support for the Singers. Jillian Bain Christie (soprano) sang her lines with confidence but she failed to engage with the audience and this was a missed opportunity as communication is key in performance. The Singers had good diction and were at their best in the Laudamus te with good antiphonal singing and an emphatic ending.

The first half concluded with Vaughan Williams’ tried and tested Fantasia on Christmas Carols. While at times a stronger presence from the Singers would have been welcomed, their hushed moments were well presented and there was great balance between Singers, organ and Alex Pratley, the bass soloist, whose light, warm voice and engaging presence was a highlight of the evening.

The concert ended with Rheinberger’s Abendleid, the style of which was so well suited to the Singers, and it proved a fitting and musical farewell to their outgoing director.

Over £500 was collected as a retiring collection after this event.

This has been used to help the work of Cornerstone, Warminster and Christ Church. 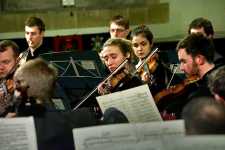 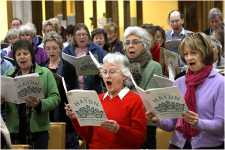 Athenaeum Singers © 2013 - Get in touch with us info@athenaeumsingers.com

Powered by HTML5, CSS3 and JavaScript